Is Consuming Noodles Really Unhealthy As Portrayed? See The Truth...

by Oladipupo Abioye 4 years ago4 years ago
26views

A lady recently asked me a question about noodles and how healthy it is to be consumed by children and pregnant women. She further stressed that everyone around her feels she is doing herself a great harm anytime they see her eat the spiral tangled  looking food. This is definitely not the first time I am hearing this information. It is gradually crippling into family discussions and the argument had always been whether it is a good food to eat without causing any major health damage to our body system.

In fact, last week, a colleague of mine who just returned from a symposium informed me that one of the speakers who is a health expert claimed that noodles should not be served to children with special needs as it causes major health complications from indigestion to poor memory. Many of these labelings are out there on the internet and spreading like wide fire.

The real questions are; Are noodles actually in the fore front of causing cancer, diabetes, high blood pressure and obesity as people have painted it to look like? or Is this just a plot from business killer within Nigerian to damage the reputation of the leading noodles manufacturing company? or is the information just a regular rumour without a substantial fact to buttress it? These I gave a deep thought and I have decided to unravel the real truth. 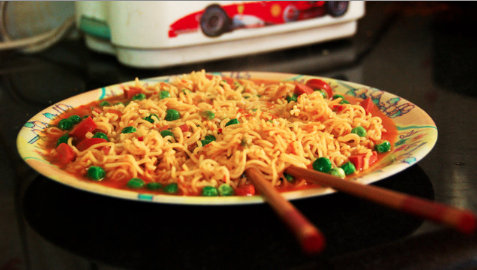 It is a known fact that noodles are a group of highly processed foods, containing high amount of sodium and due to its processing levels; contains low amount of nutrients. However, it is completely untrue and there are no known establish facts on how consumption of this type of food had single handedly caused ill medical conditions in human. My questions to the proponent of “Noodles is harmful” is what level of health damage has consumption of noodles caused in countries such as China and Korea where it is highest.

The Argument That Noodles Is A Top Concern In Obesity

The argument that Noodles is also a leading cause of obesity does not hold waters. In Nigeria and anywhere around the world, Obesity is usually caused due to consistent and sometimes glutonic consumption of foods high carbohydrate and fat without caution except in the cases of those who are genetically obese. In this scenario, if you are of the opinion  that Noodle causes Obesity…..then you should probably stop consuming spaghetti, wheat and other high carbohydrate products.

I rarely consume Noodles because it is a processed food but I have never tried picking out this “quick to prepare food” as the only bad egg amidst plenty rotten ones. Consumption of noodles is not as bad as many articles portray it. Including some amount of noodles into your weekly diet will definitely not do you any harm. If you feel noodle will make you obese, it is better you start portion control and stop eating the family size quantity and if you feel noodles are void of nutrients based on its processing level, you should consider adding some vegetables to it during cooking to raise the nutrient level. I bet you would enjoy it even more

Just like any other food products; even fruits and vegetables, consistent excessive consumption will definitely harm your body. Its is advisable to limit your consumption of noodles to acceptable levels.

I work with children with special needs and the nutrition team which I belong to, over the years had occasionally included noodles into the diets of some of our children without noticing any ill health change. In fact there had been improvement which can only be attributed to the collection of foods included in their diets.

If we must label any food as completely unhealthy…….we must present scientific facts from trusted sources to establish our claims.

Cooked Spaghetti: Who Dished It Best?

Spaghetti is a long, thin, cylindrical, solid pasta. Just like other pasta, spaghetti is made of milled wheat and water....