I saw the meme below about the popularity of pepper and consequently spicy food amongst the Yoruba tribe in Nigeria. Someone even tweeted about it and got a lot of retweets. This is a tribe of people that will put pepper in any food to make it spicy. They even have a saying about people that eat really spicy food and here it goes. 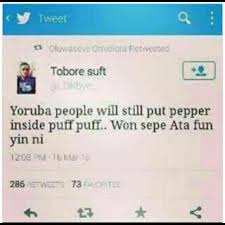 They say, “emi yepere ni emi ti ko je ata.” This loosely translates as, “the life which does not eat pepper is a fragile one”. Well, they appear to be right, if anything about this research I read about is anything to go by. It now looks that a life that eats pepper if a strong and durable one.

If you eat spicy foods, you will be happy to see this.

Lu Qi, an associate professor at Harvard School of Public Health had previously said that “there is accumulating evidence from mostly experimental research to show the benefit of spices or their active components on human health”.

After this, Chinese Academy of Medical Sciences conducted a study in order to collect data from 2004 to 2008 as part of the China Kadoorie Biobank. The researchers used self-reported questionnaires and what they found out is amazing.

The researchers analyzed the spicy food consumption of nearly half a million people age 30 to 70 across 10 regions in China, excluding those with cancer, heart disease and stroke.

It was also found among the study subjects that people who frequently consumed spicy food showed a lower risk of death from cancer or ischemic heart and respiratory system diseases.

Thinking of grabbing the next available spicy food? Wait, there is a word of caution. Certain foods, of which spicy foods are part, are triggers for people with incontinence or overactive bladders. Doctors have identified as common irritants for women. We also have to think about the whole food and not just the spicy component of it.

Bio-psychologist John E. Hayes said on CNN, “You have to consider that when we talk about spicy food, we can mean vastly different things, with different health implications,” Hayes said. “That spicy food could be low-energy-density vegetables, like kimchee. Or it could be a high-energy-density food like barbecue spare ribs.”

In conclusion, even though this research has shown that spicy foods may help people live longer, an association between death and spicy foods has not been established. This is just an indication that there just, just might be a connection between the two.

Below are some very nice and creative cakes that I believe only creative minds can come up with. Forget about...