Garri, Fufu, Usi With Vitamin A: What You Need To...

by Oladipupo Abioye 5 years ago5 years ago
8276views

Vitamin A fortified cassava products: expect this healthy option soon on your table — As an undergraduate studying Food Science, I had always questioned why Cassava products especially Garri was only known for its starch content. Just as I pondered about it, I never knew research was already on going on the bio fortification of cassava with Vitamin A. Not too long after graduation, all I read in the pages of newspapers was the first release of cassava stems that had been fortified with Vitamin A via genetic engineering process. Elated I was. Finally, Cassava, our own most consumed food can have its place in competing with other staples in terms of nutritional content.

A Brief Description Of Cassava

Cassava is scientifically called Manihot esculenta is a staple crop common to hundreds of millions of people in Africa. It is the third largest source of carbohydrates after Rice and Maize. Nigeria is the largest producer of Cassava in the whole world while Thailand is the largest exporter. It will also interest you to know that Cassava can be classified into sweet and bitter types. Both contain anti nutritional compounds with more in bitter type. That’s why the job of cassava processing is carried out by experienced people to avoid carcinogenic reactions. 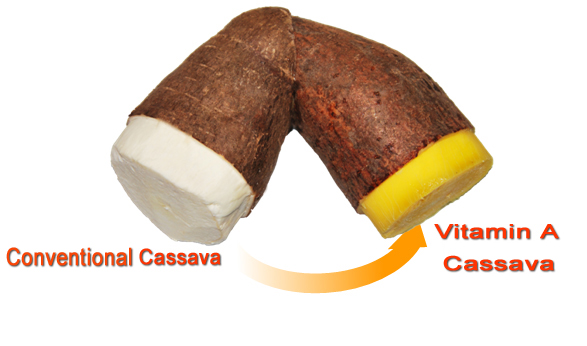 Why Cassava Was Chosen For Fortification

Over the years many of us have consumed different processed products that had been fortified. Some include fortified salt with iodine, fortified flour with vitamin A and fortified milk with vitamin D. Clearly, this products fortified with different nutrients have not achieved the aim of reducing severe acute malnutrition as most of them are only consumed adequately in the urban communities leaving the rural communities with Cassava and Maize. Cassava was chosen because it is a staple consume majorly by rural communities where nutrient deficiency is highest. Fortifying a root tuber like cassava will actually make the goal of improving the health status of Africans improve as most of our meals come from cassava and yet only providing large chunk of carbohydrate with negligible amount of other nutrients. Some common Cassava foods are Eba, Fufu, lafu, Abacha and Usi.

Why We Should Support The Consumption Of Fortified Cassava Products

Which body carried out the research on cassava vitamin a fortification?

Why Vitamin A Fortified Cassava Products Are Not Popular Yet

The Advantages Of Vitamin A Fortified Cassava Products

So friends when you visit restaurants and request for Eba or Fufu and it turns out to be yellow in colour, do not attempt to reject it or call it “eba ibo”, it could be the Vitamin A fortified cassava that had led to the colour. You can simply ask if you do not like the ones made with palm oil. It is healthy and even tastes great based on the reports of the researchers. I have not been privilege to have a taste but if you had tasted it before, please share your comments and opinions on it as it will be appreciated.

How To Make Zobo Drink Yourself At Home

Yesterday, I shared information on how to make Kunun drink, today it is the turn of Zobo. Zobo drink or...