Pawpaw Seeds Are Edible! See Nutrients & How To Eat...

by Oladipupo Abioye 5 years ago5 years ago
1193views

Usually, most seeds of crops and fruits appear completely inedible but unknown to many, a few of these seeds are loaded with numerous health benefits.

Pawpaw, botanically known as Carica papaya is a popular fruit consumed not only in Nigeria but across the entire globe. For me, no other fruit eases the pains of constipation more than papaya. I can not but remember a day when my father was seriously constipated and he called me for advise. I did not think twice to tell him to have a servings of pawpaw about the size sold for N50. The next morning it was his call I received. He was so grateful beyond measure. He said he just left the bathroom. No doubt, papaya flesh which is extremely high in vitamin C, folate, potassium, vitamin A and dietary fiber can do such magic but make sure it is ripe. 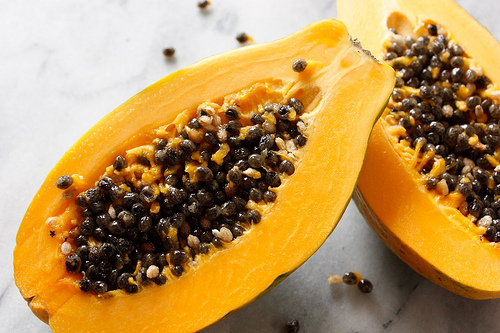 Having said that while many people only consume the pulp of pawpaw, virtually everyone I know throw away all the seeds. In fact some have claimed to hate the sight of it. The black coloured seeds have the power to improve your immunity to illnesses and diseases. It also helps in detoxification of your body system. According to researches, the seeds are high in fat and protein and a good source of calcium, magnesium and phosphorus.

NEXT PAGE :: How To Consume Papaya Seeds…

win
0
win
Oladipupo is a Pediatric Nutritionist with Lagos State Ministry of Health. He is an adventurous foodie and loves to teach and render presentations on foods and nutritional topics at different symposia. He loves Messi but Chelsea FC is his baby.

How To Make Healthy Juice From Ugwu (Pumpkin Leaf) At Home

For me, nothing is richer and healthier than been able to make everything right in your small or large size...