Are Zero or Sugar-free Drinks Truly Good For Your Health?

by Ahmed Ogundimu 5 years ago5 years ago
1234views

When I talk about zero sugar drinks in this article, I am not referring to 100 percent, no sugar fruit juice. I am rather talking about the common carbonated beverage drinks and some fruit drinks. You may be wondering what the difference between fruit juices and fruit drinks are; I will explain to you in an article soon.

Many people run away from drinks like Coca-cola, Fanta, La casera, and so on because they contain lots of sugar and hence calories. Many of us are aware of the relationship between sugar and diabetes, sugar and body weight increase and the myth between sugar and pile. I guess the manufacturers became aware of this too and started coming out with no-sugar and sugar-free versions of their drinks to get back the customers they have lost through the sugar scare. I think it worked. 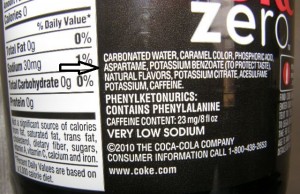 How Do They Make Soft Drinks Sweet Without Sugar?

As soon as people started seeing these “Sugar-free” and “No Sugar” drinks flooding the market, they were like “wow, just what we need”. We though we could now enjoy our favourite soft drinks without having to take in much sugar and ultimately calories. Well is this true? You will find out now.

Aspartame is now used in these soft drinks and beverages because it is about 200 times sweeter than sugar. So much less of it can be used to give the same level of sweetness. This, in turn, lowers the calories in the soft drink or beverage. Aspartame is made by joining together the amino acids aspartic acid and phenylalanine.

The concern people however have about this aspartame is that one of the products of its breakdown is methanol. It has been established that Methanol can be toxic in high amounts, but the amounts that result from the breakdown of aspartame is lower than that seen in even many “natural” foods. The problem is however the claim from a lot of people that aspartame cause cancer or helps the growth of cancer in people.

So Are Zero Sugar Drinks Good For Your Health?

I am going to provide you with excerpts from an article published by Cancer.org and let you decide for yourself;

Many studies have looked for health effects in lab animals fed aspartame, often in doses higher than 4,000 mg/kg per day over their lifetimes. These studies have not found any health problems that are consistently linked with aspartame.

On studies in human,

Most studies in people have not found that aspartame use is linked to an increased risk of cancer.

What experts and regulatory bodies say about Aspartame;

The Food and Drug Administration (FDA) regulates the use of aspartame and other artificial sweeteners in the United States. In 2007, the FDA stated:

Considering results from the large number of studies on aspartame’s safety, including five previously conducted negative chronic carcinogenicity studies, a recently reported large epidemiology study with negative associations between the use of aspartame and the occurrence of tumours, and negative findings from a series of three transgenic mouse assays, FDA finds no reason to alter its previous conclusion that aspartame is safe as a general purpose sweetener in food.

The European Food Safety Authority (EFSA) assesses the safety of sweeteners such as aspartame in the European Union.

Overall, the Panel concluded, on the basis of all the evidence currently available… that there is no indication of any genotoxic or carcinogenic potential of aspartame and that there is no reason to revise the previously established ADI for aspartame of 40 mg/kg [body weight].

My own conclusion? Sugar free soft drinks and beverages in which aspartame was used are safe for the health. The level at which the methanol people complain about is present is even lower than that present in many natural fruits. What I just don’t like about this no sugar drinks is the taste they leave in your mouth after hours of consuming them.

Best Anti-ageing Foods To Include In Your Diet

There are several things involved in ageing and we cannot really talk about them all. We can only talk about...