Why It May Be Best To Only Eat Sour Garri

by Ahmed Ogundimu 5 years ago5 years ago
1334views

Gari is a creamy-white, granular flour with fermented flavour and a slightly sour taste, made from fermented, gelatinized fresh cassava tubers. It is usually eaten with various types of soups like ewedu, efo riro (spinach), Akwa-ibom’s afang soup and many more we cannot begin to mention here. Many people in Nigeria and other West African countries, where garri is very popular soak it in water, add sugar (sometimes with Milk) and eat with roasted groundnut, donkwa, fried or roasted fish, coconut and more.

I have seen jokes talking about how garri was never advertised and continues to best other foods in terms of sales in the market. This is to tell you how much garri is popular in these countries. Someone wrote on his twitter one day – “Garri, saving life since 1800s”. These things are so true about garri. 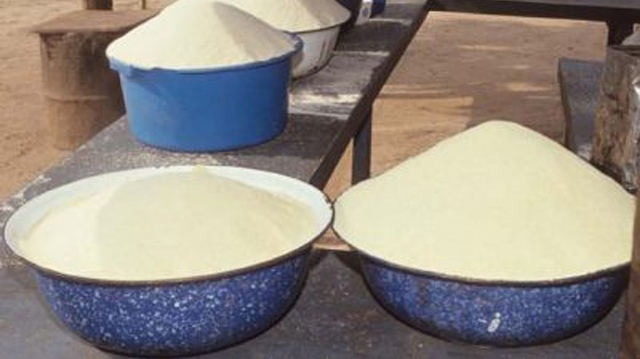 So, what’s the fuss about Sour Garri?

Do you know what makes garri sour? Well, it is a process called fermentation which takes place during the production of garri and it is usually in two stages. I will try as much as possible not to use too much technical terms but when we have to mention scientific names, there is no way around it.

(i) The first involves a bacterium Corynebacteria manihot attacking the starch in the cassava roots, leading to the production of various organic acids (such as lactic and formic acids) and the lowering of substrate pH.

(ii) In the second stage, the acidic condition stimulates the growth of a mold, Geotrichum candida, which proliferates rapidly, causing further acidification and production of a series of aldehydes and esters that are responsible for the taste and aroma of gari (Odunfa 1985).

Cassava contains the cyanogenic glucosides, linamarin and lotaustralin which are hydrolyzed after peeling, cutting and pulverising the cassava; and end up as hydrogen cyanide [HCN](Conn 1969). The hydrogen cyanide is responsible for chronic toxicity when inadequately processed cassava products are consumed by humans and animals for prolonged periods.

The traditional processing of cassava into lafun, garri and fufu unsure that most of this HCN is removed. Apart from acute toxicity that may result in death, consumption of sub-lethal dose of cyanide from cassava production over a long period of time results in chronic cyanide toxicity. That increases the prevalence of goitre and cretinism in iodine deficient area.

COMING SOON: What To Look Out For When Buying Cooking Salt!

The symptoms of cyanide poisoning from consumption of cassava with high level of cyanogens include vomiting, stomach pains, dizziness, headache, weakness and charkha.

Many local processors of garri want to make as much garri as they can make because of high demands from the market. Instead of expanding production and engage more people and equipment, what many have done is to modify how they process garri. They cut on the period they should subject the cassava to, in order to ferment. They don’t know what they are doing.

As mentioned above, the liberated cyanide (HCN) will dissolve in the water when fermentation is effected by prolonged soaking, and will evaporate when the fermented cassava is dried. This can also be found in several published research works on garri. Prolonged soaking is the key phrase there.

How do you know that the cassava from which your garri was made had gone through this effective long soaking? It would normally be sour. Like I have explained above, fermentation produces low acidic pH which makes your garri sour. This acidity also helps eliminate some microorganisms in your garri making it safe for consumption and last longer on the shelf.

7 Foods That Help You Get Sharper Brain / Memory

No matter the class you fall into in any society, there is always the need to improve your brain and...